How Sustainable Are Almonds? 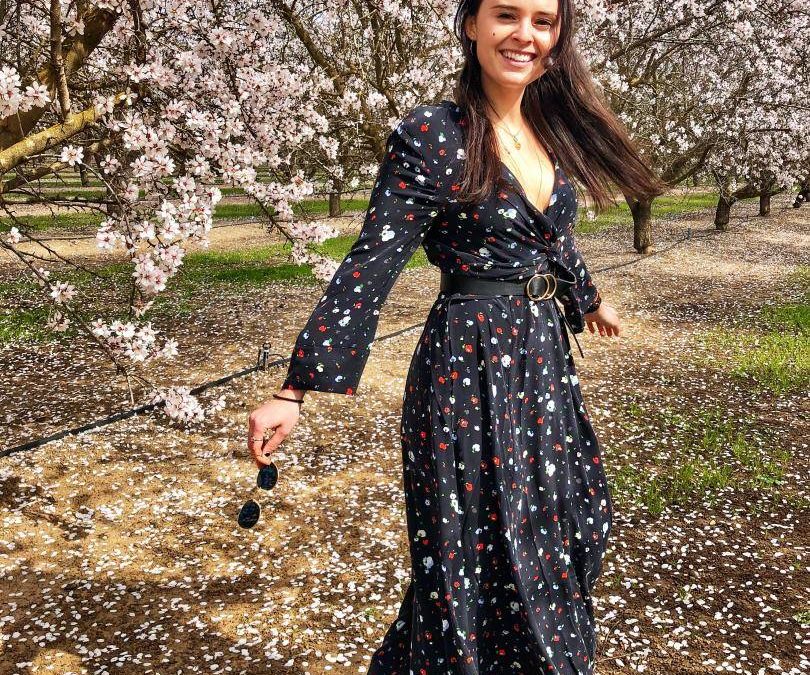 In the past, when you told someone that you’re vegan, you’d be met with responses like: “But do you wear leather?” “What are your opinions on wool?” and “But what about cheese?”.  Now, you’re met with “Ok you’re vegan, but do you eat avocados? What about quinoa? Surely not ALMONDS?”

I thought it was high time I came up with a considered response to the almond debate, so when the opportunity arose to learn about the sustainability of almonds with Almonds UK and the Californian Board Of Almonds in the Golden State, I was there with rented clothes on, and a Max in tow too.

ALMONDS GROW ON TREES
I had absolutely no idea that almonds grew on trees – #EveryDayIsASchoolDay kids. Almond trees come into bloom in late February, so during our site visits, we were met with far stretching orchards of beautiful, baby

pink and blossoming almond trees, which look much like cherry blossom. They smell absolutely incredible. And if you listen carefully, you can hear the gentle hum of bees…

THIRSTY AF
The rumours are true, almond trees are fairly water intensive. But what goes unsaid is that walnuts and pistachios require the same amount of water. The farmers are totally aware of the issue, it’s more cost effective for them to use less water too. They’ve already managed to reduce the amount of water they require by 33%, and this will reduce by an additional 20% by 2025.

ZERO WASTE
The farmers in California operate on a zero waste policy, meaning the hulls and shells get upcycled into bedding and feed for the dairy industry. There’s also research going into how these useful leftovers can be turned into kombucha, beer and even yarn for clothing.

ALMONDS NEED BEES
Almond trees need bees to pollinate their fruits. As much as it would be wonderful if the bees flew to the trees of their own accord, the almond industry is exactly what it says on the proverbial almond butter jar – an ‘industry’. Bees are transported to the orchards to pollinate the trees via trucks. Almonds are the first fruit that they pollinate in the year and they contain all 10 essential amino acids that they need…

MONOCULTURES
However, it’s not ideal that this is the only food they’re getting. As much as I think I’d love to only eat almonds, I have a sneaky suspicion that I might get a little bored of them after a while. This process is also fairly stressful for the bees, so is potentially contributing to a loss of colonies.

However, bee transportation is governmental policy in the USA. And these bees aren’t just pollinating almonds… they’re required for apples, cranberries, melons, broccoli, blueberries, raspberries, cherries… the list is endless. So if you want

to cut out almonds from your diet to support bees, you’d have to cut out rather a large chunk of your daily intake of plant goodness.

GO ORGANIC?
We visited some smaller, organic farms that look after the bees really well, and grow things other than almond trees to help them out. They also use less pesticides, which is better for the bees, the trees and of course, us human beings. It’s a shame that it’s a privilege to be able to afford the higher price tag of these almonds, but that’s a whole other article…

VEN’S VERDICT
My trip reassured me about the measures being taken to reduce water consumption in the almond industry. In terms of bee health, if you were to give up almonds, you’d need to do the same for berries and all the other delicious plants listed above. In my opinion, cutting out isn’t the answer, and you can rest assured that California almond farmers are doing everything they can to ensure the industry is more sustainable.

As a vegan, it can be frustrating to feel as though you have to make cuts to your diet that are technically ‘plant based’. But like everything in life, we should be conscious of what we’re consuming and not over-indulging in anything.

However, I have made a few small changes. Apart from chocolate, almond butter is just about my favourite thing in the world, but I’m substituting peanut butter more than I was before, to aim for a little more balance.

I’m also prioritising oat and hemp milk over almond milk. These seeds and grains can be grown locally, don’t require bees for pollination and are less water intensive, so ultimately more sustainable. A little change, but an achievable one, and one that makes me feel better about dipping the aforementioned dark chocolate in my favourite almond butter.